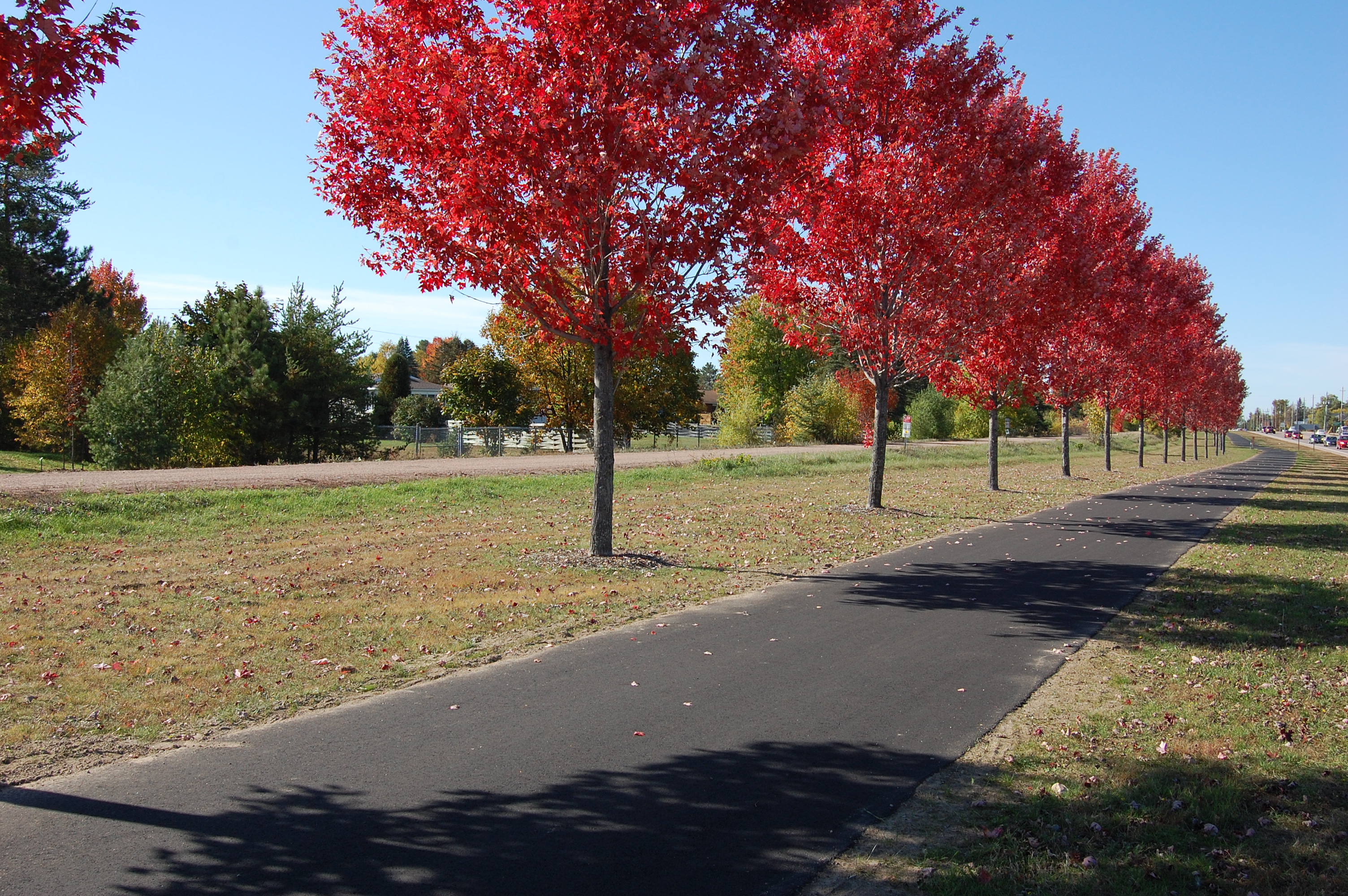 Petawawa, ON – The Algonquin Trail has been twinned in Petawawa from Town Centre Boulevard to Portage Road.  This 2.4 km asphalt ribbon designated for human powered use was constructed to separate motorized and non-motorized users along the urban section of the municipal commercial core.  “I am pleased to see the development of this four season trail in the heart of Petawawa,” indicated Mayor Bob Sweet.  “It ensures that our residents and visitors have year-round access to safe, maintained trails that connect many of our businesses, residential areas and provides alternative transportation options onto Garrison Petawawa.” 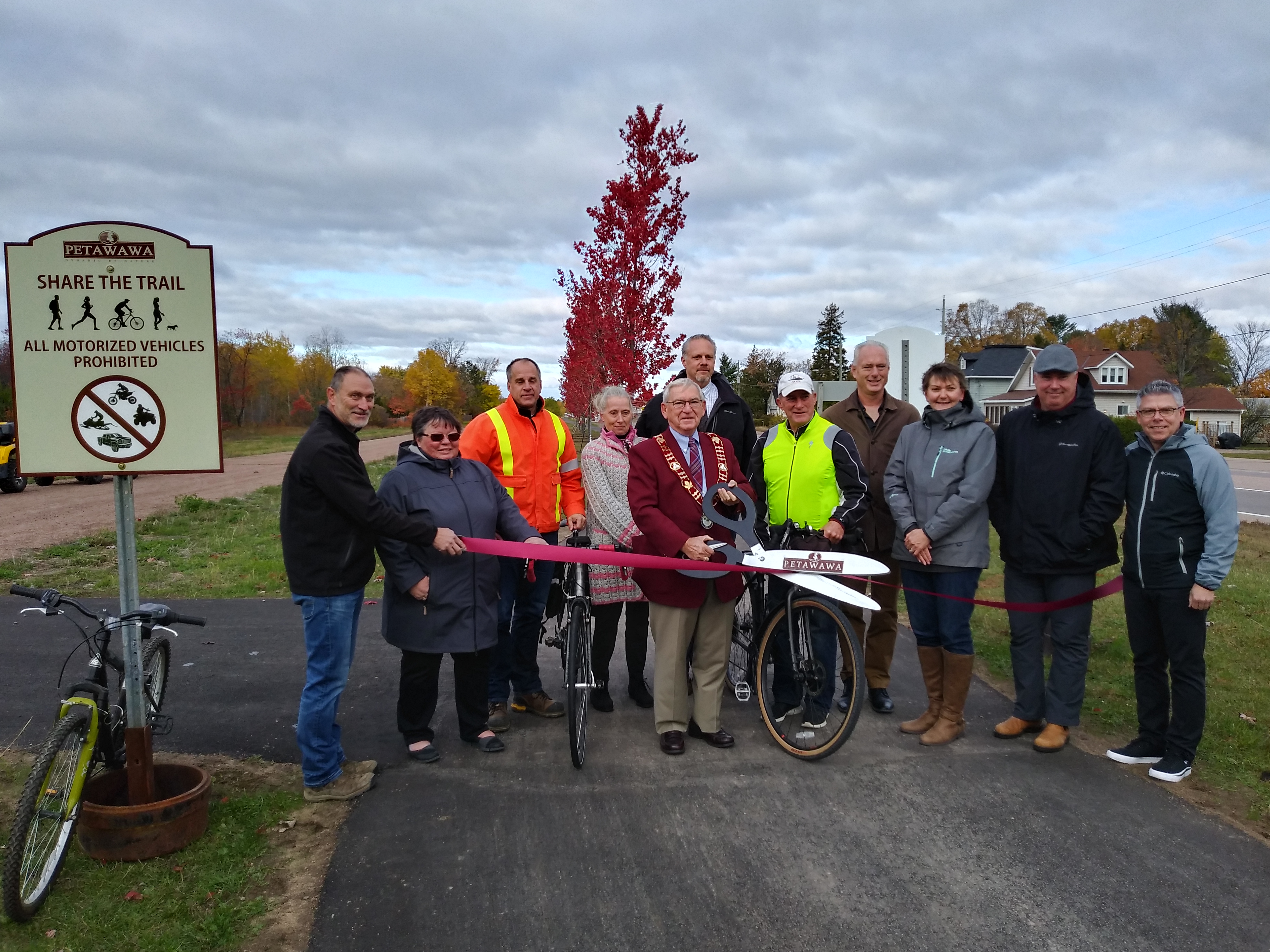 The Town of Petawawa was a successful applicant in the Ontario Municipal Commuter Cycling (OMCC) funding program.  This funding was a four-year cost-sharing directed program under the Climate Change Action Plan and was developed to help reduce Green House Gas emissions by supporting better and safer cycling networks.  With funds from this program, Petawawa successfully completed an Active Transportation Plan and began the process of designing a trail parallel to the Algonquin Trail corridor for human powered transportation. In partnership with Petawawa Town Centre Developments, the County of Renfrew and 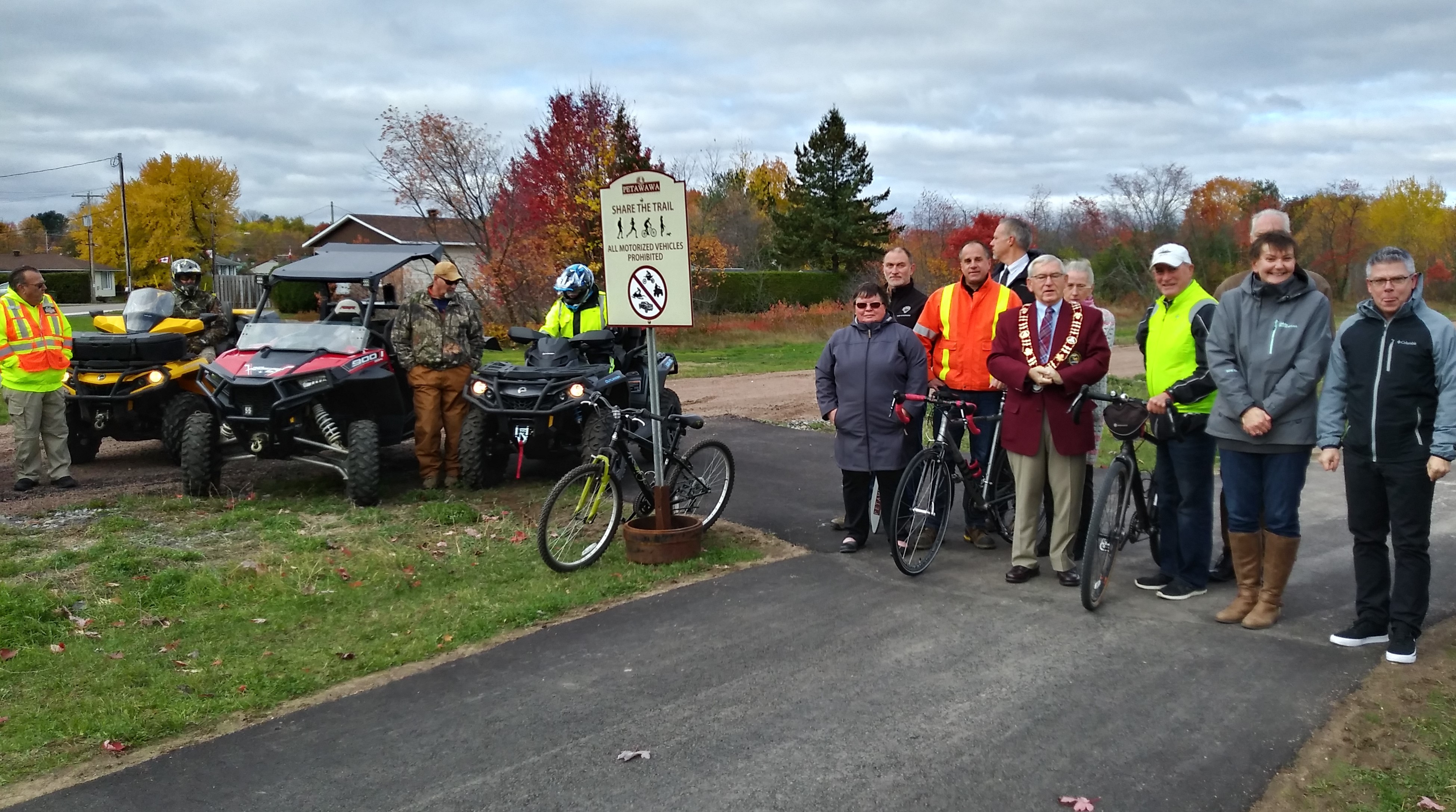 the remaining OMCC allocated funds, this trail began in late 2018 through Town Centre.  With the termination of the OMCC funding program after only one year, Petawawa Council resolved to complete the trail development to ensure connectivity onto Garrison Petawawa. The twinned section of the Algonquin Trail provides connection to the Garrison Fitness Legacy Trail for a non-motorized connected trail development equivalent to 22.5 km.  These trails join by way of the Four Seasons Bridge.

The County of Renfrew, in partnership with Lanark County and Papineau-Cameron Township acquired the rights to a 296 km section of former Canadian Pacific Railway.  Collectively named the Ottawa Valley Recreational (OVR) Trail, the section within Renfrew County became known as the Algonquin Trail.  A motion of County Council passed on June 28, 2017 designated the 219 km section of the Algonquin Trail as multi-use but provided for the opportunity for municipalities to branch or twin the trail network, at their expense in order to provide for separate use in designated areas.

Please join Mayor Sweet and Members of Council for a ribbon cutting ceremony to recognize and celebrate the success of the partnerships which have collaborated to achieve this project in our community.   The ceremony will take place on Friday, October 18th at 10:00 am in the twinned section of Algonquin Trail in the vicinity of the Norman Behnke Hall adjacent to Petawawa Boulevard.


It was cool and windy on Friday, October 18th at 10 am when Mayor Sweet, Council members, partners, staff met to officially open the Algonquin Trail twin section in Petawawa.  Despite the cool temperatures Mayor Sweet took the opportunity to share the history of the procurement of the former CP Rail line and the opportunity for municipalities to offer a by-pass or twin path, at their expense to seperate motorized users from non-motorized users.  Petawawa undertook this opportunity to provide such seperation in the urban core of the community.  Mayor Sweet remarked that "Petawawa will be known as a ATV and snowmobile friendly community", Sweet stated "the twinning was an opportunity to support all users to access the trail comfortably".

An image of the ATV users on the Algonquin Trail and the human powered users on the twinned portion was taken to show the seperation and collaboration between all parties.